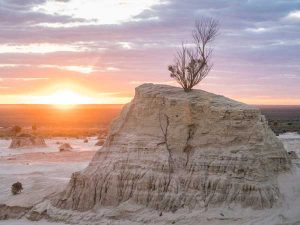 Visit our website for current prices & departure dates from your city.

7 days | Departs 6 Jul 2020 –
Learn all about one of Australia’s most tragic stories, the Burke & Wills expedition and discover more of Australia’s Outback desert landscapes on our popular 7 day journey from Adelaide. Visit the famous Dig Tree, cruise along Cooper Creek, explore Mungo National Park and enjoy a stay at the iconic Innamincka Hotel.

Please select from the options below to view the total price for your tour.

Flights are included in your price (as required)

Return transfers from your home are included (Adelaide metro area only)

Discover more about this holiday

Your adventure begins with a flight to the beautiful city of Adelaide. On arrival, you will be met and transferred to your hotel. The rest of your day is at leisure.

★ A delicious boxed breakfast will be provided to you as you travel aboard our luxurious air-conditioned motor coach from Adelaide.

After a stop for morning tea we continue to Banrock Station, which is situated near Lock 3 at Kingston on the Murray.

Enjoy views over the wetlands with a delicious light lunch. An informative and entertaining talk on the wetlands follows before we take a walk on the boardwalk trail with bird viewing “hides” allowing close sightings of the varieties of bird life which have returned to the area. Species including Black Swans, Pelicans Swamp Hens, as well as many species of Ducks, Ibis, Spoonbills, Heron, Egrets have returned making this a true nature lover’s paradise!

We continue via Renmark before crossing the Murray River into Victoria to the oasis city Mildura for our overnight stop.

This morning after breakfast we again cross the Murray River this time into New South Wales. We take the Outback track to Mungo National Park.

★ Stop at the Mungo National Park’s Interpretive Centre to learn about the legends of the dreamtime period and see the amazing evidence of ancient camp fires & fossils which are among the 40,000 relics that have been found here.

In 1974, the discovery of remains which have become known as the ‘Mungo Man’ created worldwide interest. The bones which have been dated as 62,000 years old have completely changed the original theory on the evolution of mankind.

Later, we visit a historic shearing shed made from local pine put together without the use of one single nail! Enjoy a picnic lunch before travelling to Menindee situated by the inland Menindee Lakes system.

★ Enjoy dinner at the Maidens Hotel where Burke & Wills stayed & dined (called the Plains Hotel in 1860).

Later, we continue to Broken Hill for our overnight stay.

★ After breakfast, we journey further into Australia’s remote Outback to the historic town of Tibooburra.

Along the way Kangaroos, Emus and other native animals can often be seen roaming around in the wild. We stop at the ‘Packsaddle’ for lunch, before continuing following the early explorer’s route to Milparinka. Here at this former goldmining settlement we see the original old outback courthouse and Police Station. After the interesting sights in the area, we continue through to Tibooburra.

★ Tonight is a great opportunity to enjoy & feel the atmosphere of a real Aussie Outback.

A special highlight is the paintings by famous Australian artists Clifton Pugh, Drysdale and Minchin painted on the bar wall. Hotel dinner tonight.

This morning, we set off into classic Australian Outback terrain which is possibly the best example of real outback desert landscape.

The Stony Desert has relics of ancient Aboriginal habitation. The area is mainly Mulga Bushland and arid shrub land although after rains the area often turns into a wonderland of wildflowers! The area is inhabited by Red Kangaroos, Euros, large lizards, emus and wedge tailed eagles.

★ Arrive at Cameron Corner, a well-known Outback icon where you are able to stand in 3 states at once!

Queensland, South Australia and the New South Wales borders meet here. During our tour, sections of the famous Rabbit Proof Fence will be seen.

After our lunch stop at Cameron Corner, we continue along the famous Strzelecki Track to the Outback settlement of Innamincka. Known for being ‘in the middle of nowhere’, Innamincka is home to just 44 people and offers a hotel, general store, fuel and a remote airstrip on the Strzelecki Track.

★ After breakfast, we begin our journey to the important site of Australia’s most astonishing & well-known story of survival & tragedy – the site where the final saga of explorers Burke & Wills’ expedition was played out.

Our tour to the famous “Dig Tree” takes us to the exact location and the original tree which had been carved with instructions on where vital rations had been buried for the Burke & Wills team who were returning badly weakened by lack of food and water from the north. In one of Australia’s greatest tragic circumstances, the group missed seeing the tree which resulted in the death of Burke and Wills as well as most of the expedition’s party!

★ Later, we take a boat ride along one of Australia’s most famous waterways – the Cooper Creek.

We visit the actual Burke & Wills burial sites which are located on the side of the creek on the outskirts of Innamincka. Tonight, we enjoy a fabulous Aussie style dinner at the iconic Innamincka Hotel – a night to remember!

★ It’s quite a long day along one of the world’s most gruelling outback roads – the famous Strzelecki Track.

To make the journey a more comfortable one, we depart early after breakfast at sunrise.

★ Along the way, we stop to view the awesome Moomba Gas Field complex which is set in the middle of the desert – a site reminiscent of a scene from a James Bond movie!

The road has been upgraded a little in recent times as it serves as an access to this huge gas field. Natural gas from here is piped all the way to Sydney & Adelaide. Some of the original wells & waterholes are still visible. We make refreshment stops during the trek for morning tea and a picnic lunch and to take in some of the unique landscape along the way.

Later, we arrive at Leigh Creek, a modern township built to house electricity workers from the nearby ETSA works.

After breakfast, we depart Leigh Creek for our journey back to Adelaide.

★ We stop for morning tea on our journey south to take in the panoramic views of the iconic Flinders Ranges.

Later, we continue on your journey to the beautiful Clare Valley. The area is famous throughout the world for the fine wines produced here. A delicious lunch awaits you before we continue our travels through Gawler and back to Adelaide.

You will be dropped off at your hotel in Adelaide for your overnight stay.

The next day, enjoy some time at leisure to explore Adelaide. Ask us about optional tours that are available today including day tours to the beautiful Adelaide Hills & of the famous Adelaide Central Market.

Later, a chauffeured car will take you to Adelaide Airport in time for your flight.

We use cookies to ensure that we give you the best experience on our website.Accept